Yext Answers uses natural language understanding to interpret your customers' intent and deliver the most relevant search results. We built this Understanding the Answers Algorithm site so that you can see how the algorithm works and try it out for yourself! Below you'll find the types of entities analyzed and our process for determining a searcher's intent. 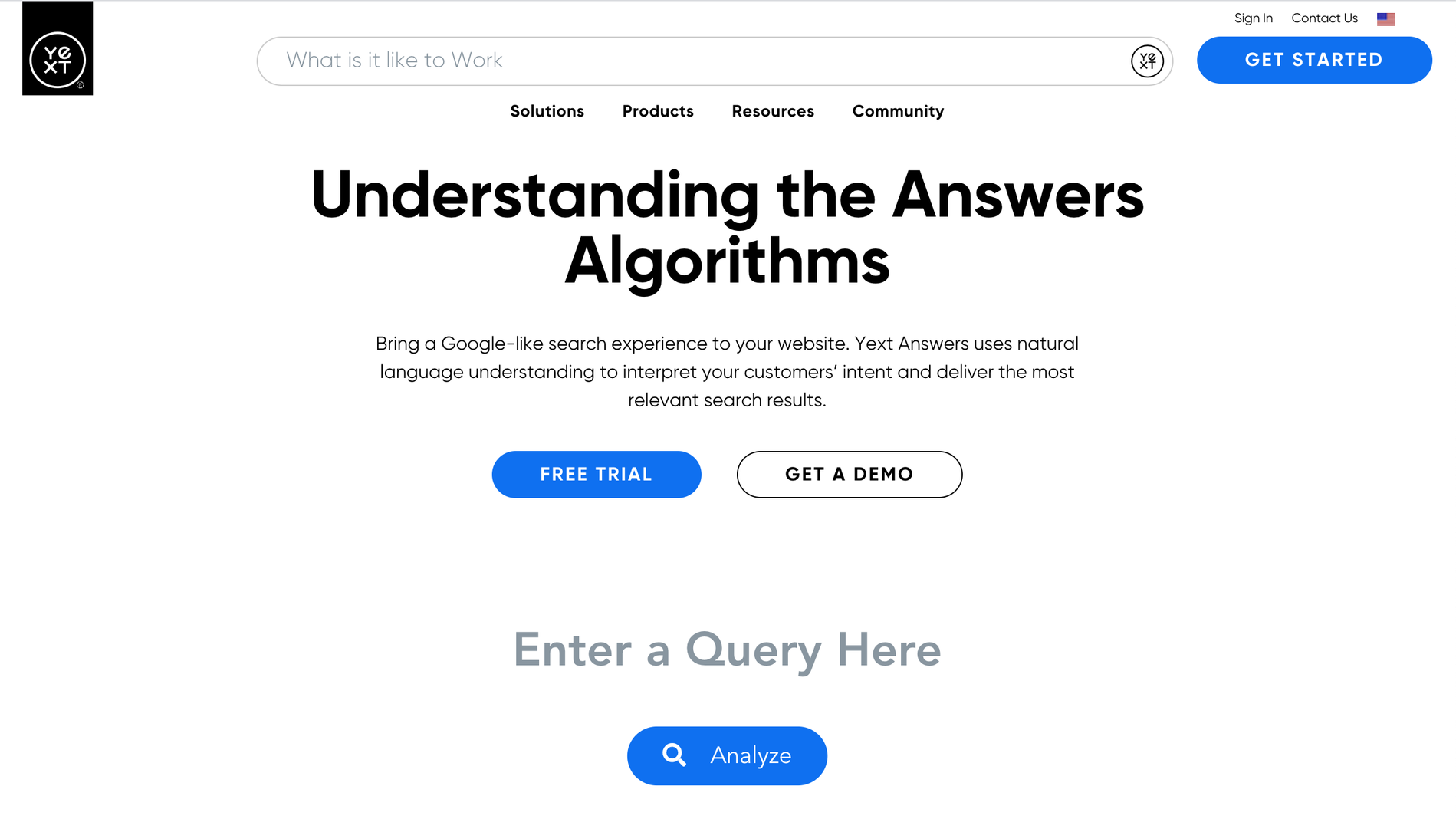 Upon clicking "Analyze", you will see that entities are highlighted. The model is trained to identify the following entities:

To give credit where credit is due: the Yext NER algorithm builds upon the BERT algorithm originally developed by Google back in 2018.

Much like a human has memory, our machine learning model has built up an extremely large database of words. It further stores how all the words relate to each other. For example, the words "apple" and "red" are in the database, and the model has learned that they are associated.

The model is much more powerful than just what is in the database of words. Much like a human can deal with words they have not seen before, our algorithm can too. It uses the same techniques we learned back in grade school:

Word Parts
If the algorithm sees a word it does not recognize, it breaks it down into its key components. For example, if it does not recognize the word "Interdisciplinary", it will break it up into "inter", "disciplin", and "ary". It can then search its database for these key components to infer a base understanding of the word. This base understanding is later improved through context clues.

Context Clues
Our algorithm can also look at surrounding words to help infer meaning. For example, if we enter the query "I just got a job working for abcdefg", we know that "abcdefg" is not a word stored in the database, and it certainly isn't a well known company. Despite this, the algorithm is able to correctly identify it as an "Institution or Brand". It did this by looking at surrounding words.

Because we thought it would be interesting, we actually track where the algorithm looks for context clues and how important it thinks each clue is. Looking below the "Institution or Brand" label, you will see the query is presented again, but this time with words shaded in gray. The darker a word, the more important the algorithm found it as a clue. We can see that in determining that "abcdefg" was a company, it found "job working for ..." relevant, while not paying much attention to "just got a". This is in line with how we would expect a human to behave. The algorithm was able to recognize that in the past, when it saw "job working for …", the name of a company followed. 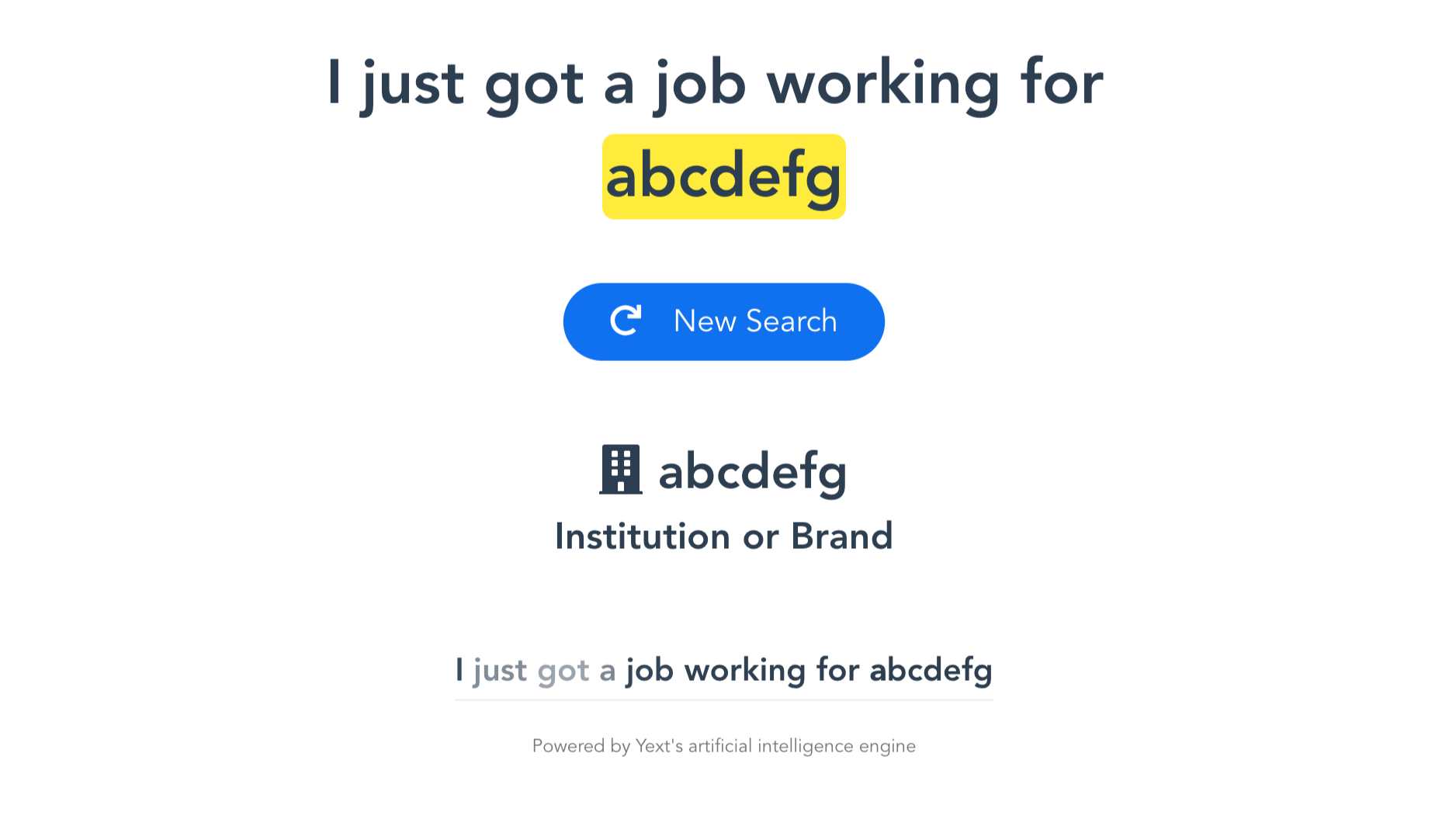 If you want to see for yourself how the Answers algorithm works, head to our Understanding the Answers Algorithm site. If you have any additional questions about Answers or the algorithm feel free to stop by the Hitchhikers Community or attend weekly Office Hours.

All information above was last updated and checked on January 8th, 2020.

One of the most common use cases for a search engine is finding something by a "location". Here are some basic examples: Cardiologist near Green Bay, Notary near me, Restaurants open now. These are all pretty simple queries, but getting these to work in a search engine is much more complex than you might imagine.
Learn More

We know good search drives business impact. It increases conversions and transactions, reduces search bounce rate, and boosts overall customer satisfaction. So, how do we get more people to trust and use site search? We embarked on a study to find this out.
Learn More

How to Measure the Success of Your Site Search

Most brands know that site search is a feature their website should have, but unless the site is dominated by e-commerce, it’s often relegated as a check-the-box task when building a new website.
Learn More

The Danger in Document-Level Sentiment Analysis

In order for your feedback to become an actionable item to help businesses provide a better experience, they need a way to analyze the granular content of all of their reviews, at scale.
Learn More

Brands know the importance of having accurate information across all the apps, maps, and directories where consumers are searching for information. In a perfect world, powering that brand data and managing each of these listings would be enough to ensure that consumers consistently get the answers they're searching for.
Learn More

On August 24, 2020, Google launched version 4.7 of its Google My Business (GMB) API. This update includes enhancements to how your restaurant locations can sync and display food menus on Google.
Learn More

In this post we are going to discuss strategy and give you some tools to effectively think about structuring your own brand's Knowledge Graph!
Learn More

Welcome to the Hitchhikers Program

Welcome to Hitchhikers! We are so excited to have you join our mission of creating amazing search experiences for brands of all sizes.
Learn More

Businesses of all sizes use both WordPress and Yext to build amazing client experiences, and as more and more brands around the world add the Yext Answers bar to their WordPress powered sites, we wanted to provide a way to drive their time-to-value even faster.
Learn More

For those of you who are new to Hitchhikers — Welcome to Yext's new training platform & community! Hitchhikers will be the home for all of Yext's product and release updates moving forward so we encourage you to create a free user and check out the platform!
Learn More

Alyssa Hubbard began at Yext in the Upward Rotational Program. Now she is full-time on the Hitchhikers team, working to build a platform to empower our community of Yext power users.
Learn More

We are constantly making improvements to the underlying Answers algorithm. Our latest algorithm release, Andromeda, includes cutting edge improvements that optimize the overall search experience. With this release, our algorithm now has the ability to search semi-structured data. You can now opt-in to access these improvements depending on your configuration.
Learn More

What’s WCAG? WCAG stands for the Web Content Accessibility Guidelines (WCAG). WCAG is not always black and white; its rules often have a variety of interpretations.
Learn More

Shoppers have questions about your products, and your ability to answer will determine if they buy or if they bounce. But with rapid changes to your business, it can be hard to keep your product information consistently up-to-date.
Learn More

Shoppers have questions about your products, and your ability to answer will determine if they buy or if they bounce. But with rapid changes to your business, it can be hard to keep your product information consistently up-to-date.
Learn More

A New Way to Search FAQS

Semantic search is a new way of searching for FAQs. Instead of looking at keywords, it measures the similarity in meaning between two questions. Answers does this using BERT - the same revolutionary natural language processing technology that powers other Answers features like location detection and entity recognition.
Learn More

How to Build Discoverable and High-Converting Landing Pages

Search is a massively important marketing channel. Fifty-three percent of website traffic comes from organic search, so it’s critical that businesses optimize for these experiences. But how do you actually build out a strong presence in organic search? Having search-optimized landing pages is critical.
Learn More

Exporters: From Yext to Your Listings

Our Listings delivery pipeline ensures your data stored in the Knowledge Graph appears on Listings everywhere consumers are asking questions. How do we make sure your data is updated on all publishers as quickly as possible while still ensuring data is formatted properly for each endpoint? Yext’s Listings exporters.
Learn More

2020 has been a rollercoaster of a year for everyone for a multitude of reasons. On the Hitchhikers Team, we were able to overcome some of the year's obstacles to really transform the program.
Learn More

See for yourself how the Answers algorithm works on the Understanding the Answers Algorithm site built by our Data Science team!
Learn More

Our type system serves as the foundation of the Knowledge Graph by dictating the structure, validation, and display of fields. The type system guarantees the consistency and correctness of any field value retrieved from the Knowledge Graph. This makes it easier for our engineers to reason about code that handles particular fields, for our customers to manage their entity data, and for our publishers to trust the quality of our data.
Learn More

3 Integrations That Can Help You Get More Out of Yext

As a Yext user, you’re likely well aware of the platform’s product suite and the value each solution delivers. But did you know that you can provide even better search results for visitors, collect more reviews from customers, and analyze data more closely by integrating Yext with the apps and systems your team already uses?
Learn More

On February 25th, 2021, Google launched version 4.9 of its Google My Business (GMB) API. This update includes support for additional hours types, for options such as delivery, drive through, and more.
Learn More

Yext's seasonal releases are always packed with new features and functionality to keep Hitchhikers on the cutting edge of search, and the Spring '21 Release is no different. Across the product suite, we have added new features that will help you to drive value and improve your user experience.
Learn More